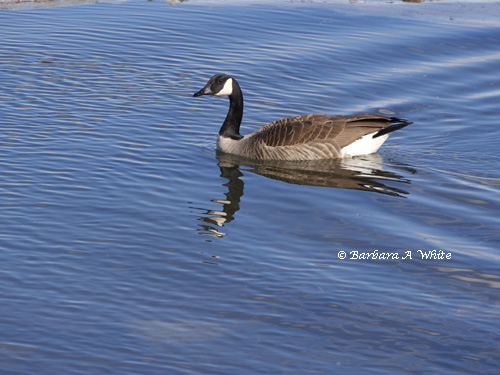 …and so are the Canada Geese.  Actually, this particular goose has been wintering here in his area along with a large number of his friends and relatives.

These delightful creatures hang around the waterfront in Barrie over the winter and I have been feeding them when I get a chance along with many other folks. Unfortunately, they are a bit slower than the gulls and by the time the geese bend down to pick up the food, the gulls have flown in and grabbed whatever you have thrown.

I really like photographing the geese. They always take a nice shot, especially when they are on the water or around snow or ice. 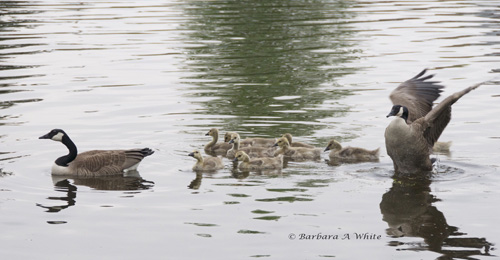 Geese mate for life and live between 10 and 24 years of age. Now in my mind, these birds were found only in Canada and Northern United States.  According to Wiki, they are found all over the world. In North America they winter as far south as Florida, and San Francisco Bay area of California.

If you have seen geese fly, then you know they fly in V formation, a sure sign of fall and spring. They also swim with their goslings in a line, mother and father each at an end. (I remember once sitting in the car on a main road with a line of traffic behind us, waiting for several families of geese to cross the road in front of us with all their babies, taking their time… so trusting)

Many winter  in the area where they summer if there is adequate food and a lack of predators.

Unfortunately, they are also considered pests in places where there is an overabundance. And,they do make a mess!

Even so, I am now looking forward to when the little ones are born and they start moving around. That should be soon enough so I  now watch my favourite geese haunts for signs of nesting.